When you add a Google Analytics tracking code to the pages on your website, the analytics can tell you lots of information about your site. You can see how many people are using it, when they are using it, what devices they are using and lots more. It will also show you how people are using your site. For example, we can see how many users who started our online application form actually ended up submitting it. We can see this displayed as a funnel.

It's called a funnel since a proportion of visitors tend to fall out at each stage in the process narrowing the funnel as visitors progress to completion. 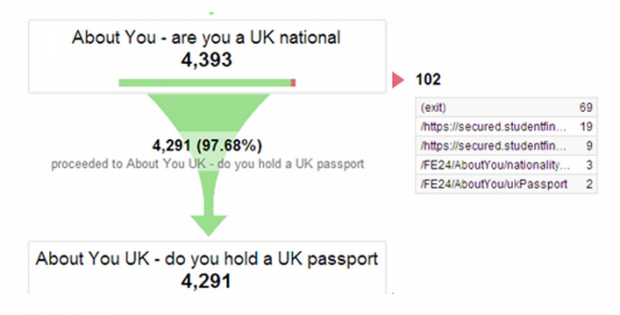 If a lot of people are dropping out at a particular page, then it may indicate that there is a problem with this page, so it is an invaluable tool.

At the end of the funnel you can see the total number of people who made it all the way through – this is often described as a conversion rate, hence the term Conversion Funnel Analysis.

Student Loans Company launched a new product called 24+ Advanced Learning Loans in April 2013. This was a new loan that was offered to Further Education students who were aged 24 or older. As part of the application process for this product, the students had to provide some unique reference numbers on their application form. These reference numbers could be found on the offer letter that their college or university sent them when they offered them a place on the course.

To ensure that students who started the application form had the codes required to complete it, we added in some copy to the first page of the application advising the students that they needed their offer letter in order to apply.

After the online application form for 24+ Advanced Learning Loans went live, we eagerly checked the Google Analytics funnel to see how the customers were getting through it.

Instantly we could see that there was a problem with one of the pages. In other areas of the funnel the percentage of users progressing from page to page was generally 85%-95%. However, only 27% of students were able to progress beyond the Course & Loan Provider Code page.

This was the page that the students were asked to enter a reference number from their offer letter. 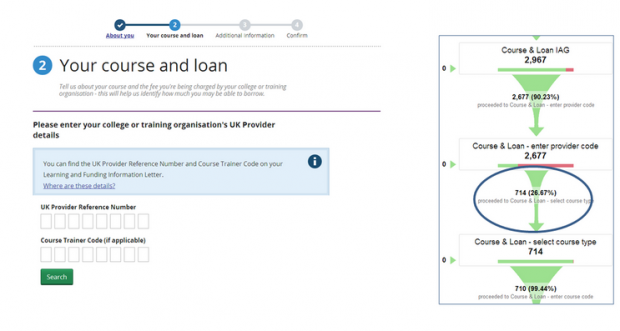 We realised that people who did not have the required reference number had been starting the application, and when they got to this page they effectively hit a brick wall, with nowhere to go and so had to abandon the application.

So what did we do?

We added a new question, to the start of the application asking people if they had this reference number.

If they said yes, they continued with the application, and if they said no, we took them to a page asking why not. This was tracked with Google event tracking so we could see how people responded.

We were then able to take the student to a page that could offer advice – for example, if I clicked on the above link saying that I did not have an offer to start a further education course yet, then I would be taken to the screen pictured below, giving me information about how to apply for one. 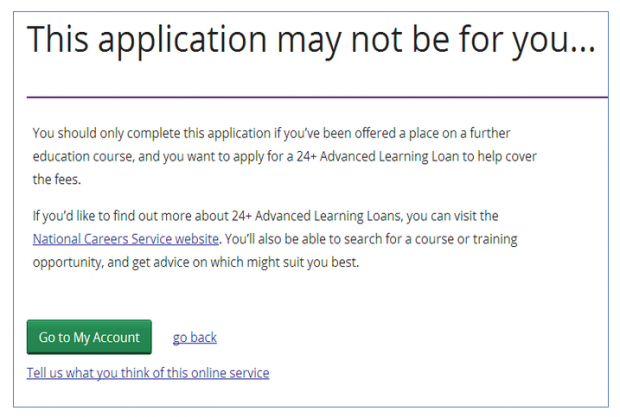 We also added a link to the course and loan page for students who did not have the number. This meant that people who answered yes to the first question asking them if they had the Learning and Funding Information Letter but did not actually have it, did not hit a brick wall when they got to this page and couldn’t enter it. 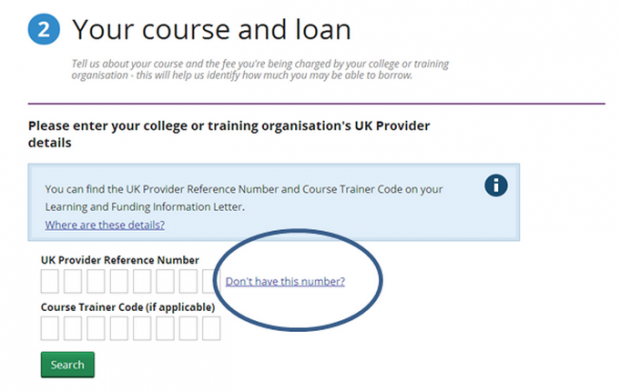 Clicking on the link ‘Don’t have this number?’ took them to the page asking them why, and then off to a relevant guidance page.

After these changes were made the percentage of students progressing from the course provider page increased from 27% to 81%. 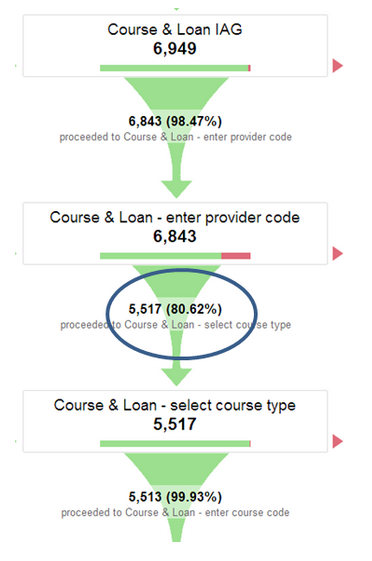 It was not 100% as some people answered yes to having the Learning and Funding Information Letter, when in fact they didn’t. However, we could now find out why they didn’t have it, and were able to offer them help on how to get it.

If you want learn more about getting the most out of digital analytics then you can talk to Jim on Twitter. Don’t forget to sign up for email alerts.