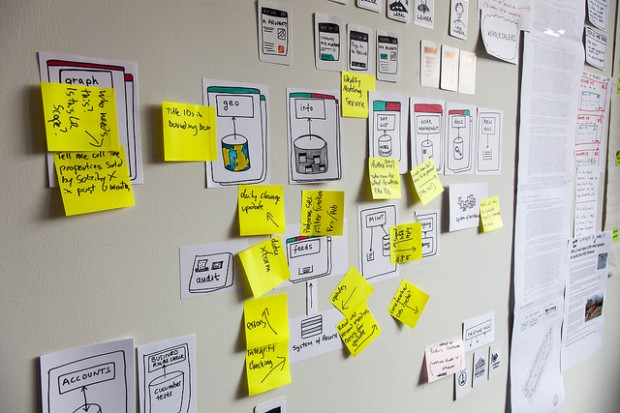 Last week marked the end of a 6-week proof of concept at the Land Registry, supported by GDS.

Vital to the concept was the team of 4 Land Registry developers, working across 2 locations. Here’s an account of working on the concept from Senior Software Developers Matt Shaw and Simon Tsang.

Making use of different tools, technology and services on the concept helped us to perform better as a team over the 6 weeks. The tools helped speed up process, allowed for flexibility, and added the enjoyment of getting things done.

Before the concept started we hadn’t spent much time using virtual machines and cloud-based services. The concept allowed us to use cloud-based services for pretty much everything, which was great. We used GitHub for source control, Travis CI to perform automated build, test and deployment and Heroku to host our services.

Using Git we managed our own code branches. We experienced issues switching between Windows and Macs, but found ways to overcome these. Peer review of code and quality checking became an integral part of the process for us.

Using Travis CI as our cloud-based integration service provided huge benefits to the project, with its fully automated approach it allowed us to make changes quickly and easily. Working in this way enabled agile integration, reducing the need for manual intervention and allowing the team to work faster.

As a developer trying new languages and frameworks is always interesting.  The concept provided a good opportunity to create applications with technologies including Python, Javascript, HTML5, Django, Flask and PostGIS.

During the concept we paired across 2 locations. Initially, working remotely in Plymouth - separated from the rest of the team in Croydon - proved difficult. We had to spend valuable time playing catch-up with the technologies being used and decisions being made.

To improve communication between locations we made use of tools such as Slack, Hackpad and Trello for regular conversations. Slack quickly became our principal method of communicating. It has some great features such as displaying messages from Github and Heroku. Hackpad became a space for collaborative documentation of ideas, research and decisions.

Although the tools certainly helped with remote working, they didn’t fully compensate for the lack of face-to-face interaction. In the end, it was the improvement of our video conference software and hardware that really reduced the distance between the team. This brought the four developers together to complete the concept.

Comment or get in touch via email if you'd like to know more about Matt and Simon's experiences using the tools mentioned above.