Every month the transformation programme moves forward and more exemplars speed towards their live dates. To help demonstrate progress, new ways of working and approaches to service delivery, we’re encouraging departments to talk about their work, show the thing they’re building, and - importantly - share what they’ve learnt throughout their digital transformations.

3 exemplars told their stories and showed their workings in the GDS Digital Zone at the Public Sector Show on 13 May.  This huge event, held at the ExCel centre in London, attracted leaders and managers from the public sector, as well as those from charities, social enterprises and voluntary organisations involved in public service delivery.

While Francis Maude spoke about transforming public services on the main stage, visitors to the Digital Zone had the opportunity to meet with those working directly on the exemplar projects, and could see live demos of online services at different stages in their transformation. 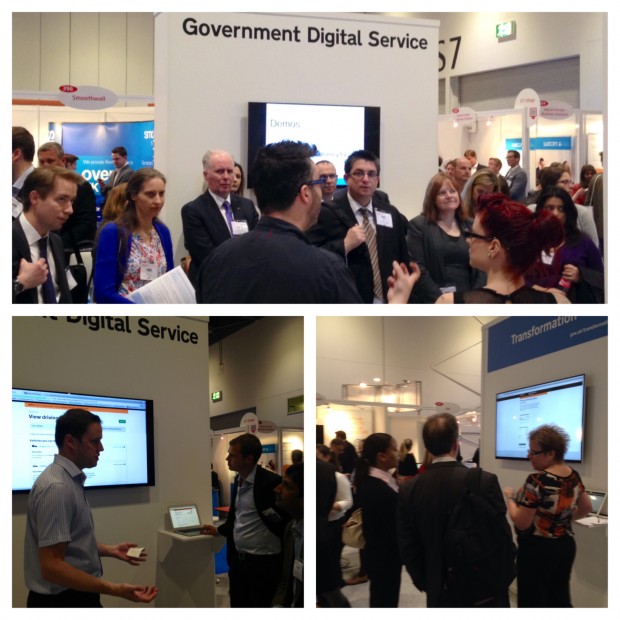 First up was Julie Williams presenting exemplar number 8, Rural support (Common Agricultural Policy or CAP), which is in its alpha phase.  Rural support will help farmers submit accurate information about how they use their land to claim CAP payments.  Julie, speaking from the perspective of a Customer Insight Manager, told her audience how user research - gathered from farmers in their homes and at trade shows - had shaped the  usability of the service, including the its mapping tool. The tool was demoed and the audience could see how straight-forward it will be for farmers to feed through to government verifiable information about what geographical features are on their land and how it’s being used.

Simon Manby and Kaz Hufton, Product Owners working on exemplar 25, Lasting power of attorney, grabbed the interest of a large crowd with their discussion of the technologies and methods used to build this new service. Simon spoke of their success in getting buy-in from senior colleagues at the Office of the Public Guardian and how this support for an agile approach to digital transformation encouraged the team building the product. Kaz then walked the audience through the new online Lasting power of attorney application process and highlighted where the form had been made simpler and clearer for users.

Rohan Gye, Service Manager for 3 of the DVLA’s exemplar services, closed the live demos with an explanation of exemplar 9, View driving record.  The service is on gov.uk as a public beta and the team is busy gathering user feedback.  Rohan said the Public Sector Show provided “ a good chance to get user feedback first-hand”.  After running through the exemplar’s background, he let the audience loose on the live demo and soon people were logging in to their driving records. From what we saw, public sector employees generally have squeaky clean licences and a surprising number would be capable in the driver’s seat of a tank.

In each of the sessions there was a real sense of interest both in the work going on within government departments and agencies to improve digital services for users and in the experiences of the team members.

Although the Public Sector Show doesn’t return until next year, there will be plenty more opportunities for the teams to share progress and for people to see demos of the new services.  9 of the exemplars will be shown at Civil Service Live, which takes place at 4 locations on 5 days over the summer.